Discover
The remnants of our recent history.

Tourism in Aragon contributes to the construction of Aragon’s Democratic Memory through the compilation of all the places linked to the Civil War in our Autonomous Region.
Uncovering them through this website and making them available to whoever wants to visit them in order to know about our history and nurture his/her historical knowledge.

You may take free or guided tours. For specific guided tours, you must get in touch with us via email at huellasguerracivil@gmail.com or on the phone number 669 094 303.

Visits are planned in an ‘à-la-carte’ format, depending on the locations you wish to tour, the time you have at your disposal, the weather, the time of the year, etc. 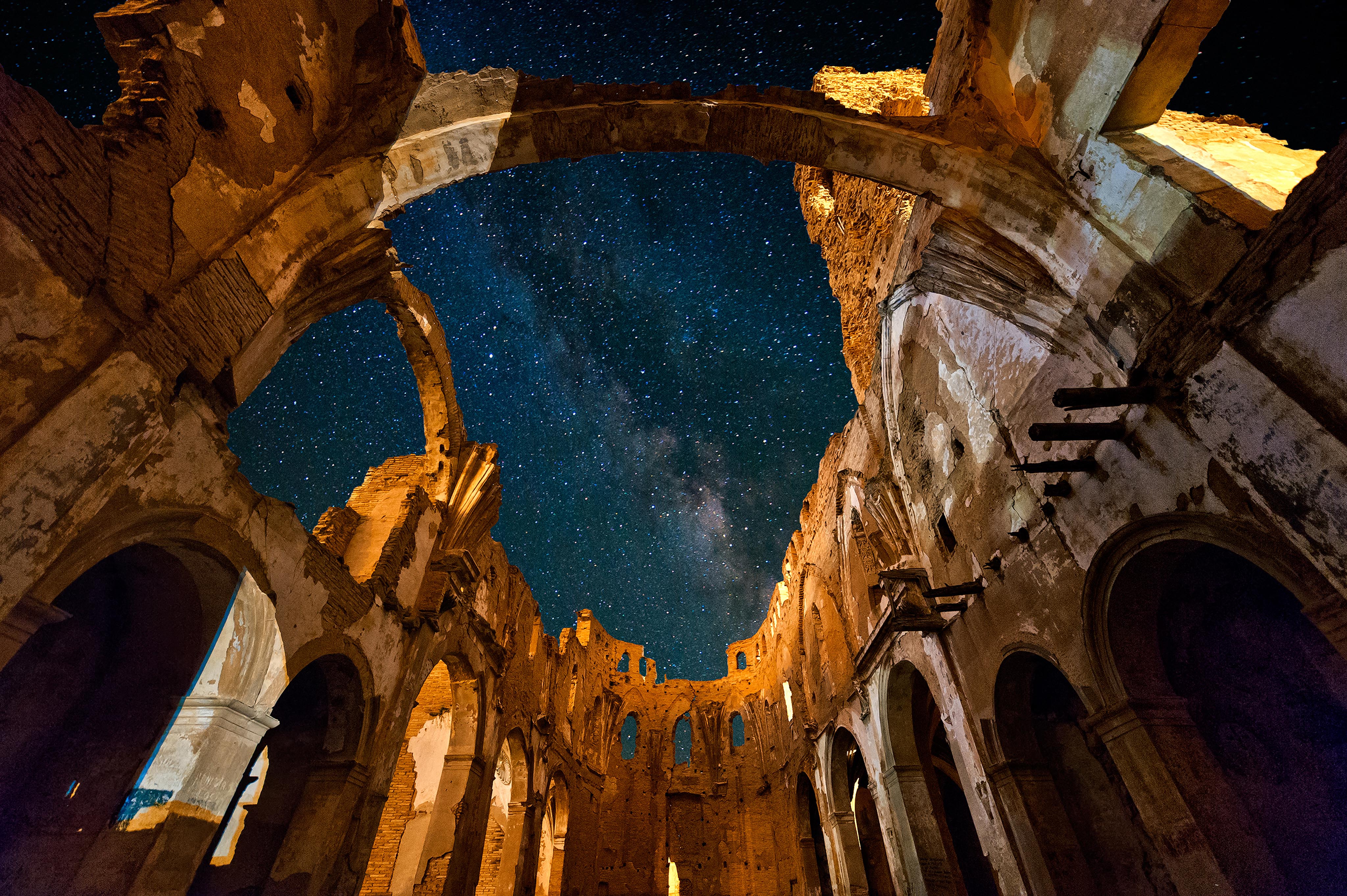 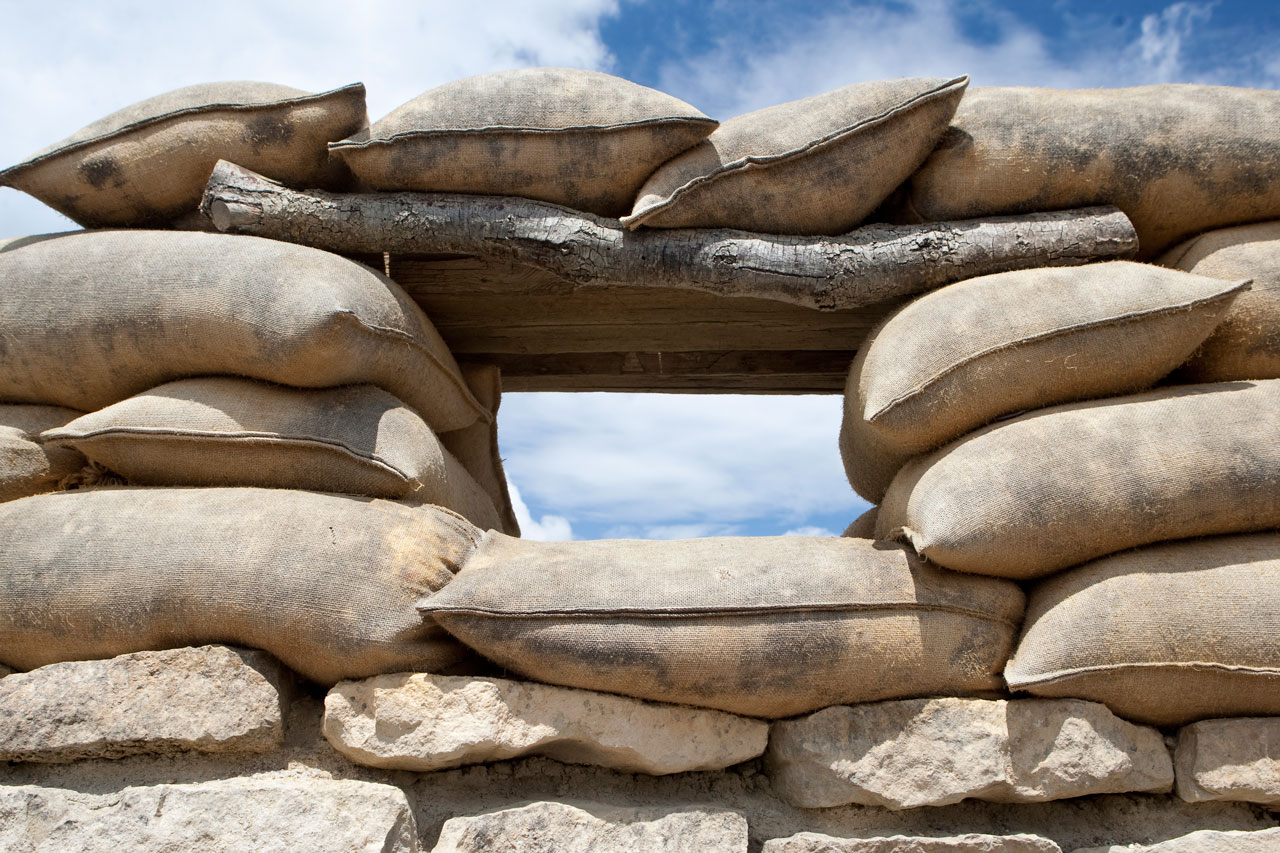 In the Hoya de Huesca comarca, we may come across routes that, under the name of “huellas de la guerra” (traces of war), allow us to go hiking while we experience the vestiges that the Civil War left in the Comarca.
Trenches in Siétamo, Monte Pilatos, Loporzano o Tierz or Huesca’s machine gun nests are some of the compiled routes.
Besides, there are several vestiges we can come across in other towns in addition to the town of Huesca itself.

Sarrión was the scene of two significant strategic-defensive battles fought during the Spanish Civil War. In Barranco de la Hoz, several elements such as machine gun nests, command posts, troop shelter, linking branches for trenches are conserved… there is an Interpretation Centre for the Battle of Sarrión that gathers the principal aspects of the battle and the subsequent reconstruction of the municipality under the Devastated Regions Plan..

The “Aragon Offensive” in July 1938, gives us an insight into the strategy of the Francoist troops oriented towards conquering Valencia, launching a two-pronged attack: the Mediterranean coast and the Teruel-Valencia road. At that point, the conflict reached the highest levels of violence in the entire Comarca and especially in Albentosa. A trench line built by making the most of a rocky escarpment and the cliff carved out by the river is conserved next to the castle in this town. 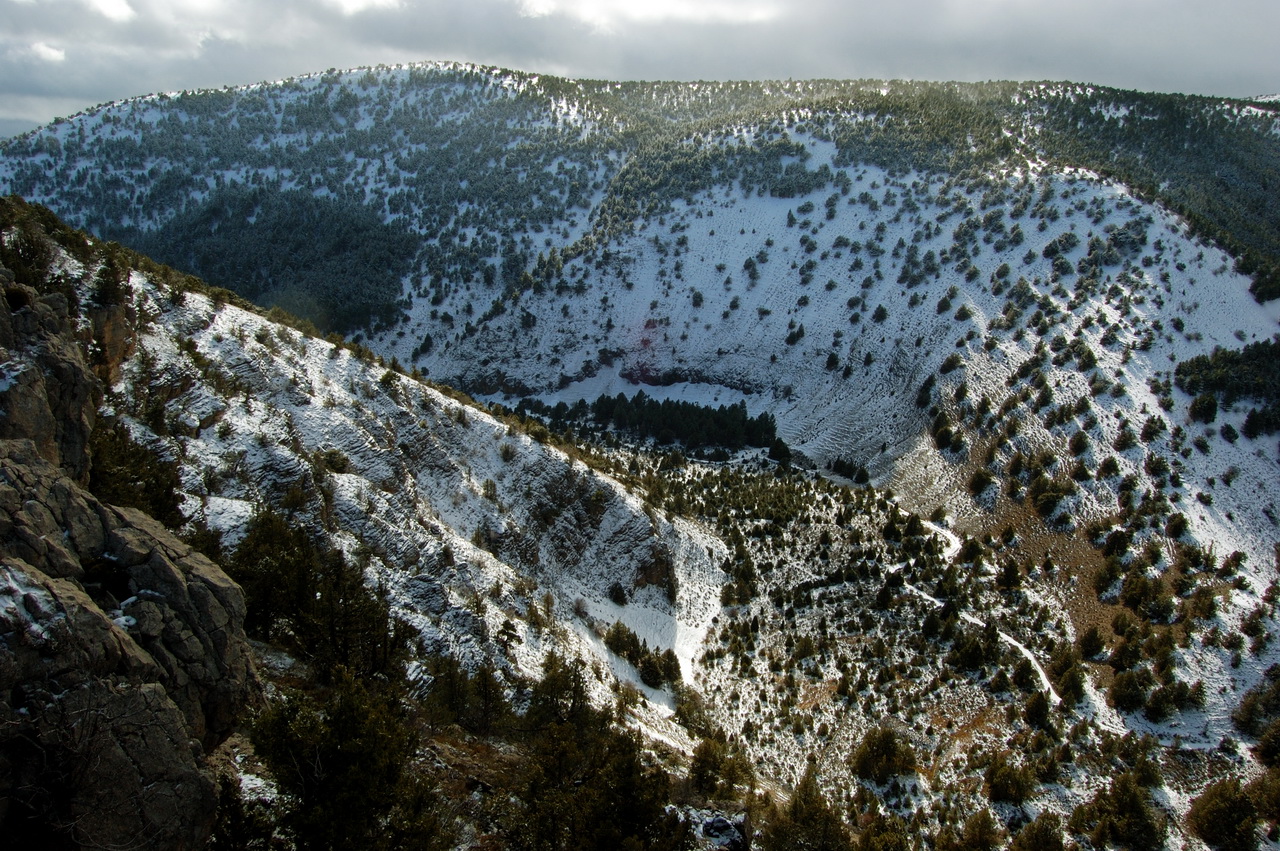 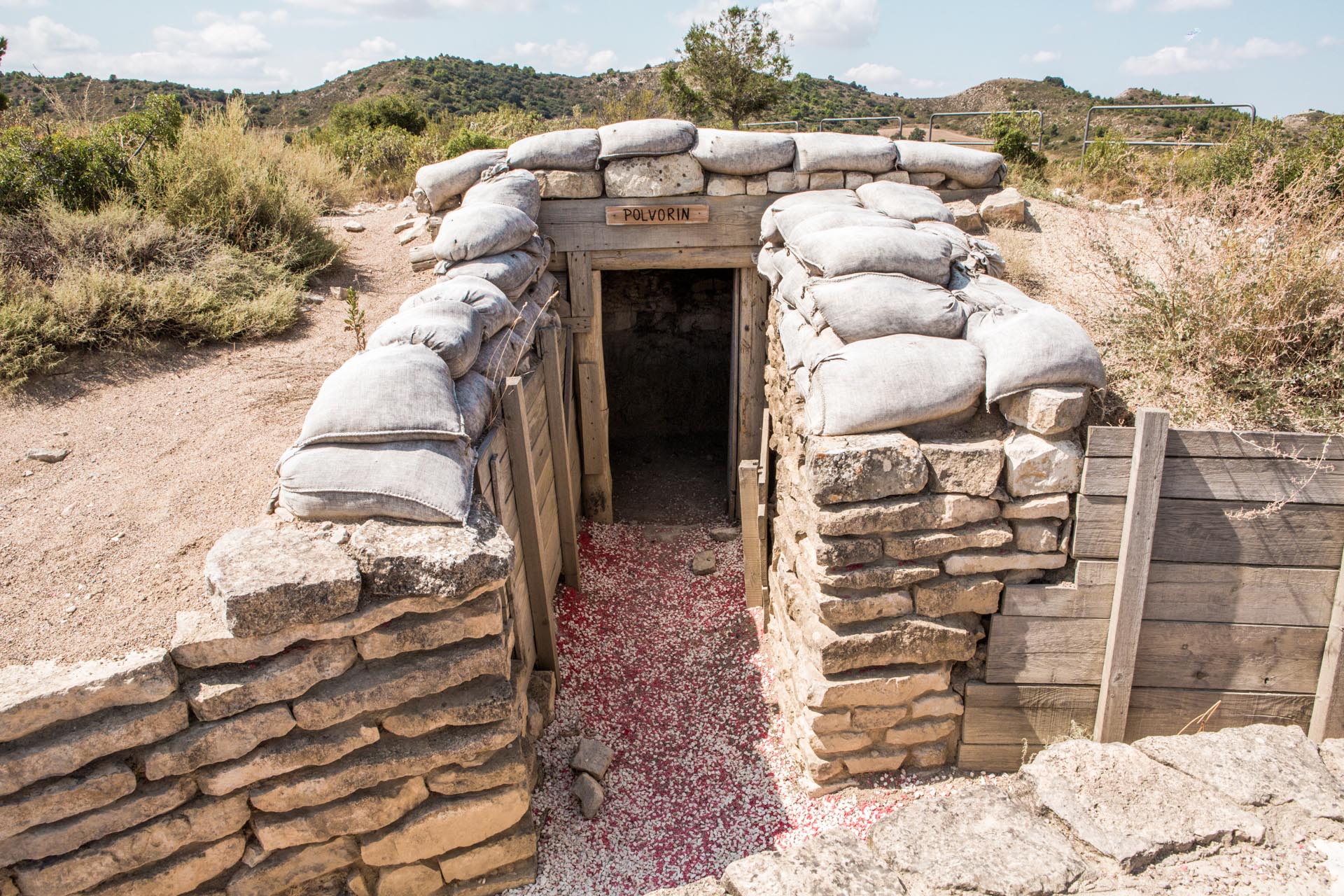 The battle line pierced the Monegros comarca, going through the Sierra de Alcubierre, which serves as a natural border between the provinces of Huesca and Zaragoza, thus favouring the construction of military equipment and civil defence items in both the foothills and the surrounding towns.

There we can come across the Interpretation Centre for the Mountain Civil War in Robres, Aragón, the Orwell Road in the Sierra de Alcubierre, Las Tres Huegas road, San Simón, the Bunker in Lanaja, the Antiaircraft Refuge in Monegrillo, Santa Quiteria in Tardienta or the Aerodrome in Albalatillo.

The mention of Teruel in the Civil War evokes thoughts of the plummeting temperatures of the winter of 1938. However, it was one of the most active zones in terms of the battles, combats and contests fought, not to mention the geographical, political and economic significance it attained and even the international impact it had.

It surfaced as an uprising in 1936, just like in most of the settlements around it; this is attributed to the absence of the Republican faction and because of the high number of the security forces related to the insurgents.

The area remained war-torn until well into 1938, which added to nearly two years of continuous wars. That’s why a huge amount of materials are conserved today, of which the vestiges included in the “Atrinchérate” (Dig in) route stand out. 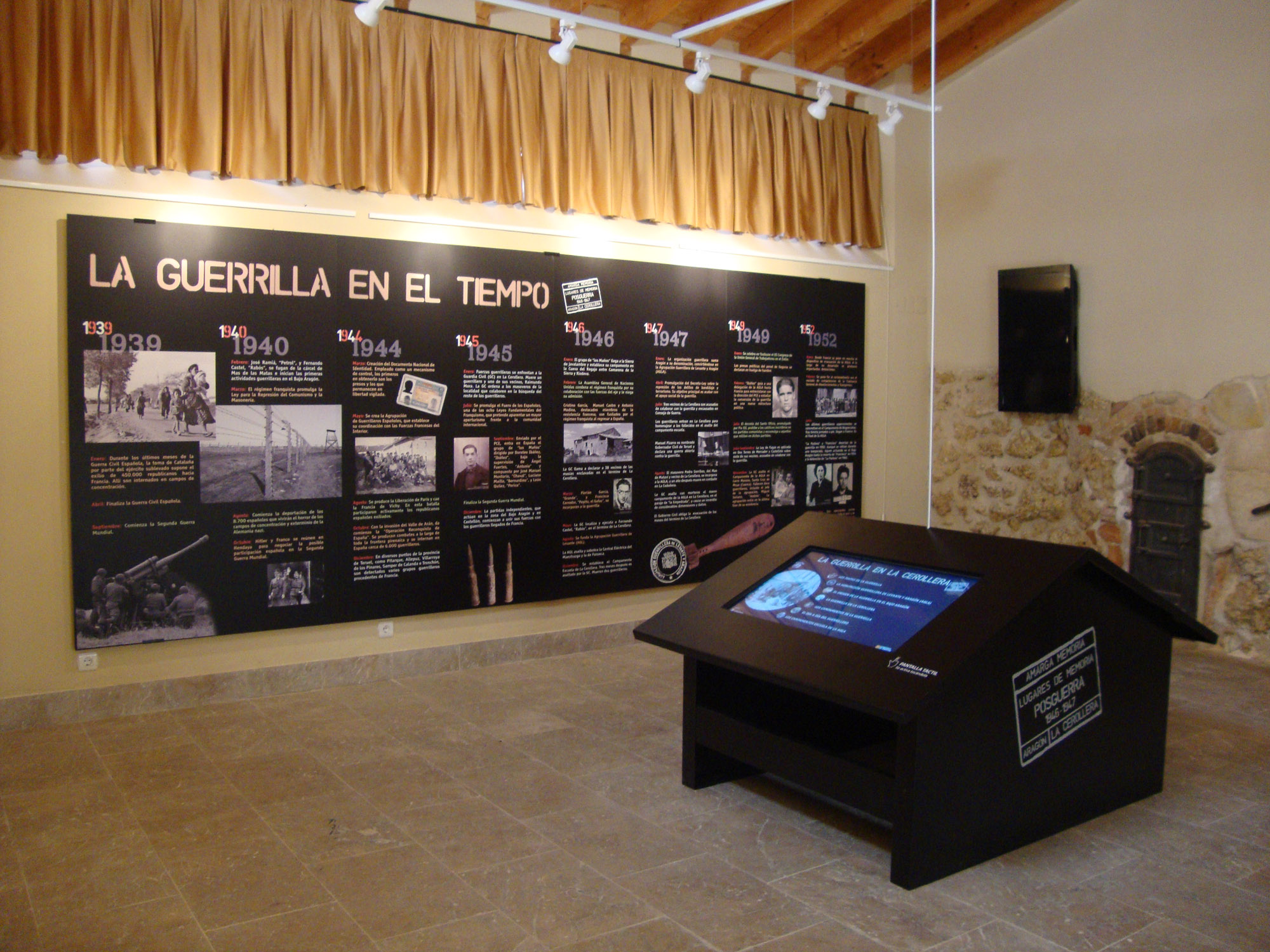 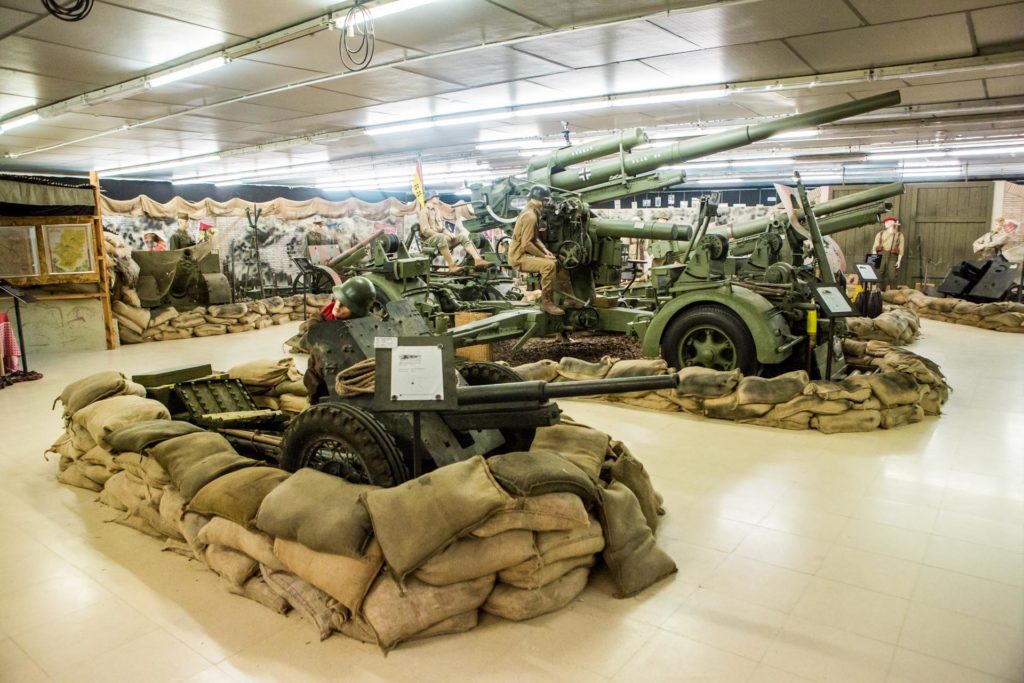 The Bajo Aragón comarca has prominent settlements with vestiges of the Civil War in the regional territory of Caspe and Fayón.

Caspe was the Republican capital of the Aragón area. Here, we cannot overlook the Council of Aragon as a remarkable political element.

In Fayón, we come across the Museum of the Battle of Ebro, which is also recreated at the end of July.

Guided visits are made to the trenches distributed over different points of the Comarca.

The territory of the Bajo Aragón comarca has preserved many of the traces left by the Civil War in Aragón. The gory episode of Alcañiz, which was bombarded on 3rd March 1937, serves as a date for all the Aragonese citizens to commemorate the DAY OF REMEMBRANCE OF AND HOMAGE TO THE DEMOCRACY.

Alcorisa, Belmonte de San José, La Cerollera, La Codoñera or Mas de las Matas are some of the other settlements with vestiges in the Bajo Aragón comarca.

You can find out more about which cookies we are using or switch them off in settings.

This website uses cookies so that we can provide you with the best user experience possible. Cookie information is stored in your browser and performs functions such as recognising you when you return to our website and helping our team to understand which sections of the website you find most interesting and useful.

This website uses Google Analytics to collect anonymous information such as the number of visitors to the site, and the most popular pages.

Please enable Strictly Necessary Cookies first so that we can save your preferences!